HUDSON VALLEY – TheUSS Slater(DE-766), the last Destroyer Escort from WWII afloat in the country left its port in Albany on Sunday morning with the assistance of New York State Marine Highway Tugs Sarah D. and Nathan G. on a voyage to the Caddell Dry Dock in Staten Island for repair work.

Hundreds of smaller boats were on the Hudson River Sunday to catch a glimpse of the ship that originally launched on February 20, 1944, after having spent 11 months being built in Tampa, Florida.

The Cannon-class Destroyer Escort is named for Frank O. Slater, who received the Navy Cross posthumously after being killed while aboard the USS San Francisco in 1942 in the Solomon Islands.

The ship was decommissioned in 1947 and became part of the Hellenic (Greek) Navy in 1951, sailing under the name Aetos. Greece decommissioned the vessel in 1991.

Through a fundraising drive,Destroyer Escort sailorsfrom around the globe donated money to pay for a Russian tug boat to bring the ship from Crete to New York City where it was moored next to the USS Intrepid. The Slater resided in NYC from 1993 until being moved to its permanent home at the Port of Albany in 1997. 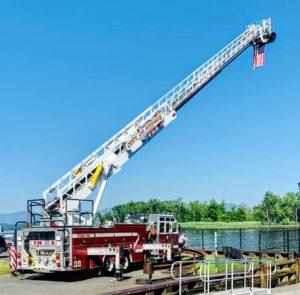 TheCity of Hudson Fire Departmentused their ladder truck to salute the USS Slater during its Sunday trip to the Big Apple. The department’s ladder truck parked along the shore of the Hudson, and raised the ladder skyward with the American flag hanging from the extended ladder, according to Fire Chief Anthony DeMarco Jr. The chief ventured up to what he calls his “Favorite spot to take pictures from” on Mount Merino Road to capture a shot of the WWII survivor underway.

Several swimmers atKingston Point Beachstopped their activities to watch as the Slater came under the Kingston-Rhinecliff Bridge and past the beach. “That ship is enormous,” said Mary Kline of Esopus. 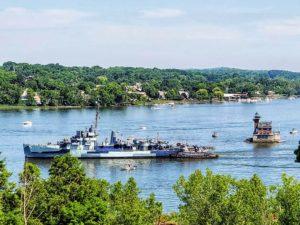 The Philipp family of Poughkeepsie spent the day on their boat and were able to take part in the unofficial flotilla escorting the ship south. “Pictures don’t do the ship justice,” Eric Philipp said, adding “It’s a large ship. My kids were in awe when we got close to it.”

The Slater crossed under the Walkway Over the Hudson and the Mid-Hudson Bridge around 5:00 PM on Sunday. 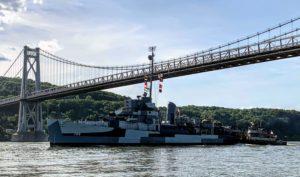 Additional onlookers were gathered on both sides of the shore of the Hudson all the way down the Hudson Valley hoping to catch a glimpse of the USS Slater. Many boaters and sightseers were a maritime app to track the vessel and obtain an accurate time to see the voyage.